This article is part of a 5 part series covering how unauthorized changes still remain the bane of today's IT operations, regardless of advances in technology, and how automated change detection is critical for addressing this.

-  -  -  -
According to industry reports, as much as 95% of issues are caused by change (configuration, data, capacity, workload, code, etc.). Something actually has to change for an incident to occur. Therefore by identifying what changed and when the change occurred, IT can be alerted early-on to the risk of an incident.

Moreover, many times even designated personnel cannot verify what they're actually doing. So unfortunately unauthorized changes still get deployed into environments. While there are tools available, like CyberArk, that allow IT Operations to control privileges, the problem is that it's impossible to know what users actually did.

Unauthorized Change at Fault for Root Cause Analysis Time

The biggest challenge for Root Cause Analysis (RCA) is the time required to locate the root cause. It's been shown that unfortunately unauthorized change is predominantly at fault for most RCA. When the root cause is accurately identified, then it is relatively easy to fix. However, currently the problem is exactly how to know what changed and how to actually get to the causal ID in order to fix the problem. 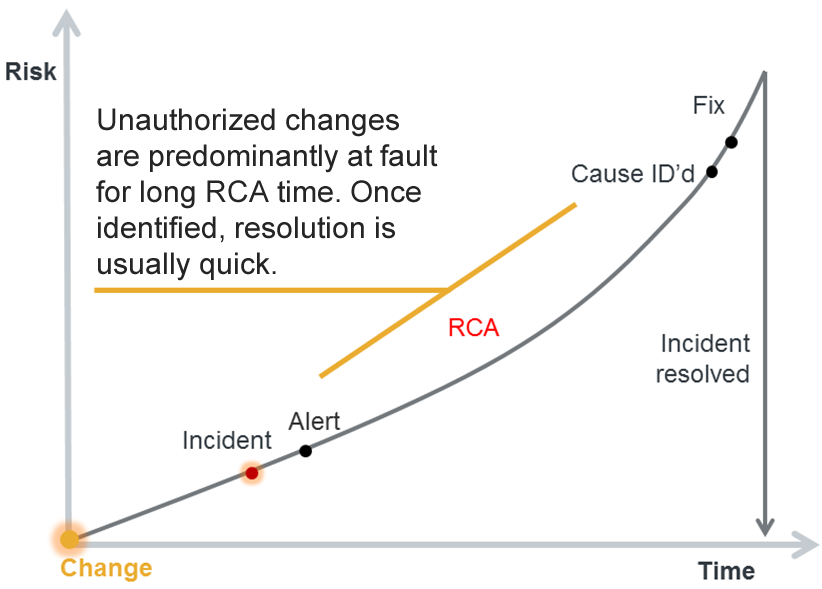 Evolven tracks and correlates changes. This allows IT Operations the ability to significantly slash the time required for RCA. So by quickly finding out what's changed, the root cause can be reached and then the issue can be promptly resolved. 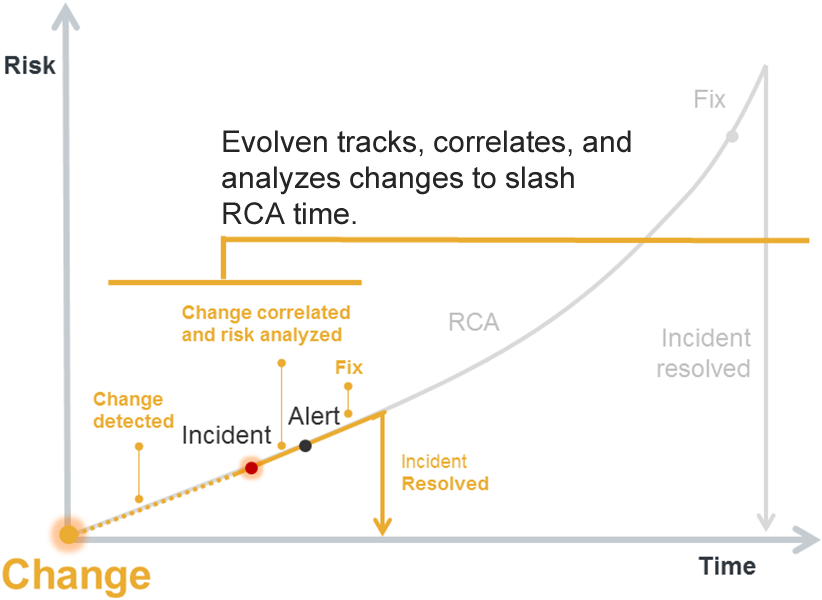 In this example, through Evolven’s integrated view of alerts, changes are identified at the top. Here there is an APM alert for an on-demand loan that's slowing down.

At the same time there is a Splunk alert from a Tomcat001 device that shows disk space is running low. 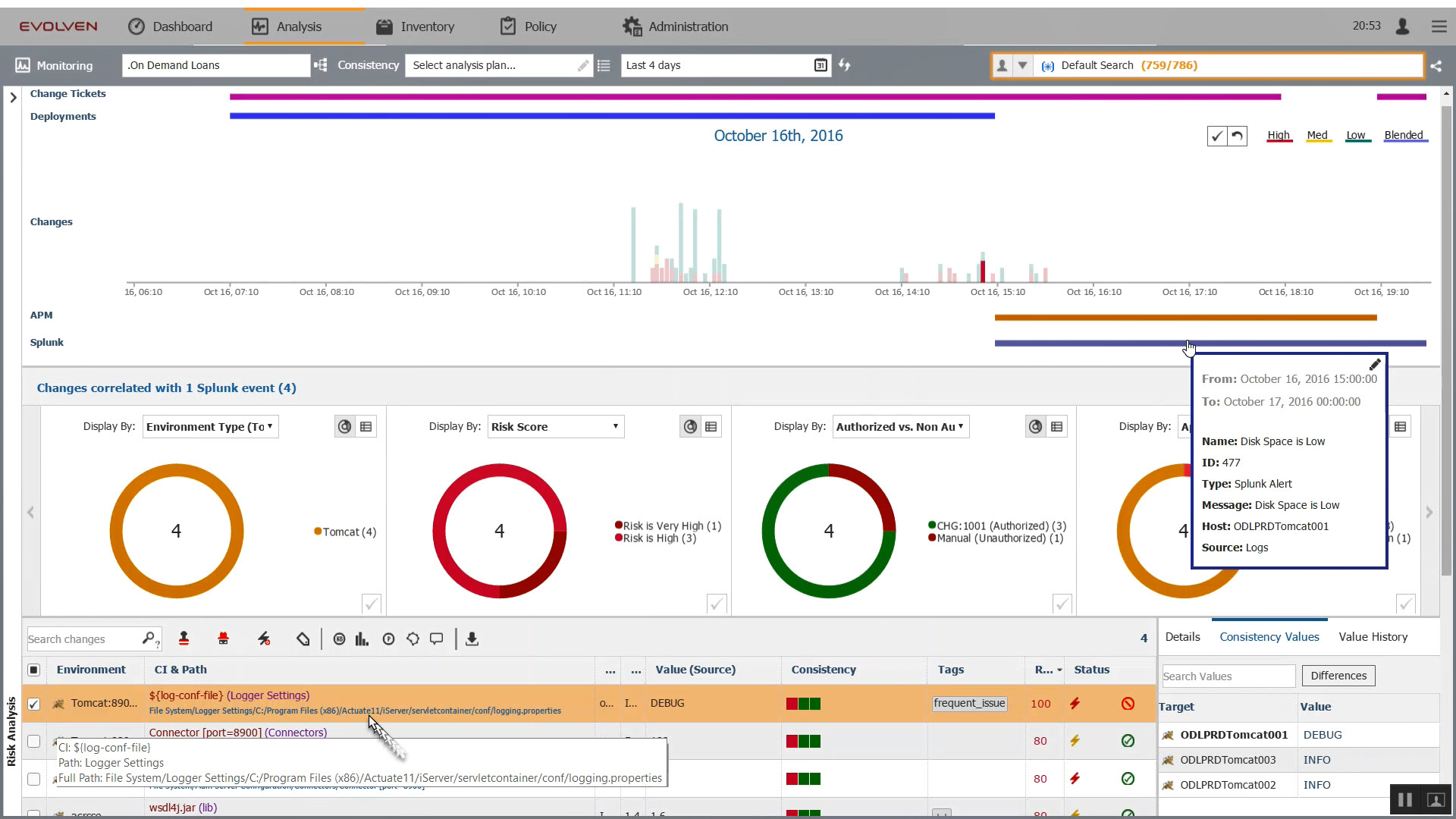 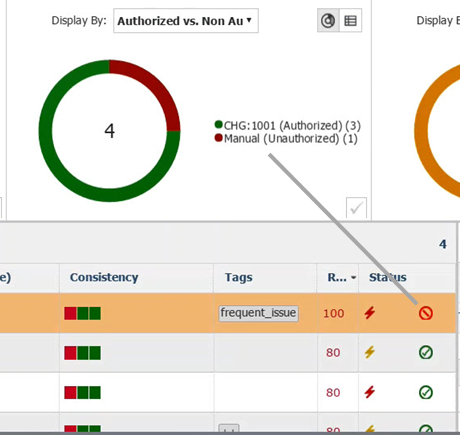 By applying Evolven’s analysis and analytics to changes, one can immediately see that there is an unauthorized change.

It appears that overnight somebody turned on the debug plug. The interface shows the incident happened on Tomcat001 while both 002 and 003 servers remained in a normal state.

With this level of detail from Evolven, one can very quickly see the location to go to for the fix.

To sum up this example:

Instead of going through a long grueling process, costing business operational value and commercial brand, this issue can be resolved rapidly and efficiently with Evolven.


Michael Sanders is a Director of Technical Sales at Evolven. Mike has over 30 years of experience in the IT field. From building servers and networks to managing large IT departments, Mike has provided direction and leadership for delivering product solutions to help IT Ops teams proactively resolve performance and availability issues.

Prior to joining Evolven, Mike worked for 14 years at Compuware Corporation (Dynatrace), where he consulted and sold on application monitoring (APM) software and triage practices.

While at Compuware, Mike was responsible for product direction, field technical practices and solution selling for the company's APM division. Mike was instrumental in developing the services division at Compuware to help lead the new APM solution growth.

Mike's expertise extends to many aspects of production support and DevOps, bringing an understanding of both technical and operational practices for assuring customer success.