Costs and Scope of Unplanned Outages

Costs and Scope of Unplanned Outages

Despite advances in infrastructure robustness, occasional hardware, software and database downtime still occurs. Furthermore despite large investments of personnel time and budget dollars, manual configuration errors resulting in Web application downtime can cost some companies up to $72,000, survey data shows (NETWORKWORLD, How much will you spend on application downtime this year?).

We know that outages are big.

But How Big Is The Cost Of Unplanned IT Outages? 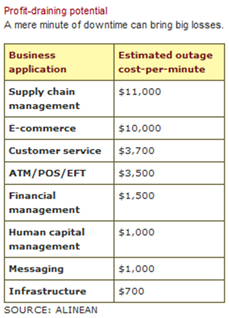 Though unplanned outages are IT issues, they are, more importantly, business issues. Unplanned outages never produce revenue for the company experiencing them. In 2008, the average revenue cost of an unplanned application outage was estimated to be nearly US$2.8 million dollars per hour, according to a report by IBM Global Services. IT disruptions can affect the entire delivery chain of the products and/or services provided by a business.

According to Dunn & Bradstreet, 59% of Fortune 500 companies experience a minimum of 1.6 hours of downtime per week. To put this in perspective, assume that an average Fortune 500 company has 10,000 employees who are paid an average of $56 per hour, including benefits ($40 per hour salary + $16 per hour in benefits). Just the labor component of downtime costs for such a company would be $896,000 weekly, which translates into more than $46 million per year. (IT-Director.com, Assessing the Financial Impact of Downtime)

Average downtime costs vary considerably across industries, from approximately $90,000 per hour in the media sector to about $6.48 million per hour for large online brokerages. (Information Management, How Much Does Downtime Really Cost?)

The Hourly Cost of Outages

A conservative estimate from Gartner pegs the hourly cost of downtime for computer networks at $42,000, so a company that suffers from worse than average downtime of 175 hours a year can lose more than $7 million per year. But the cost of each outage affects each company differently, so it's important to know how to calculate the precise financial impact. (NETWORKWORLD, How to quantify downtime)

The Monthly Cost Of Outages

According to Alinean, on average outage risk accounts for $2.5 MM a month, so if we do a rough calculation, then that would cost a company about $30MM a year.

The Scope Of Downtime Per Year

And how does that figure in terms of time.
As Gartner has shown, downtime can reach 87 hours a year. Obviously that's the sum of many outages - anywhere from a few minutes to hours. But at the end of the day, for an organization this becomes a staggering figure. (ZDNet, Average large corporation experiences 87 hours of network downtime a year)

And when an outage occurs, it's a race against time to handle it before it spirals out of control. According to the IT Process Institute, resolution time per outage is around 200 minutes. It's really interesting to see just how much time is being put in to resolve outages, when you consider what  is happening to the customer experience and company reputation in this time.

Majority Cause of Performance Errors Are Misconfigurations 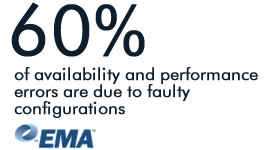 The IT Process Institute's Visible Ops Handbook reports that "80% of unplanned outages are due to ill-planned changes made by administrators ("operations staff") or developers.".   Getting to the bottom of the matter, the Enterprise Management Association reports that 60% of availability and performance errors are the result of misconfigurations.   The little changes that are implemented to the environment and system configuration parameters all the time.

Downtime costs also vary significantly within industries, especially due to the different effects of downtime. Business size is the most obvious factor, but it is not the only one.

On average, businesses lose between $84,000 and $108,000 (US) for every hour of IT system downtime, according to estimates from studies and surveys performed by IT industry analyst firms. In addition, financial services, telecommunications, manufacturing and energy lead the list of industries with a high rate of revenue loss during IT downtime. (IT-Director, Assessing the Financial Impact of Downtime)

If an outage creates a disruption in a supply chain with a high level of expectation in responsiveness (i.e., medical services or overnight delivery), the business may be exposed to damages. Often, damages stem from the inability to deliver (i.e., loss in delivery fees due to arriving late or lawsuits due to collateral damages). These highly publicized situations can impact shareholder value. (Information Management, How Much Does Downtime Really Cost?)

The sales-per-hour numbers do not include the value of customer loyalty. To more accurately assess total lost sales, the impact percentage must be increased to reflect the lifetime value of customers who permanently defect to a competitor. If a large percentage of customers typically become very loyal after a satisfactory buying experience, the impact factor may significantly exceed 100 percent, possibly by a high multiple. (IT-Director,  Assessing the Financial Impact of Downtime)

Downtime cost results in lost employee productivity, which can be measured in terms of the salaries, wages and benefits of idled people.

Failure to fulfill the conditions of an SLA can lead to the imposition of substantial penalties and fines. In addition, the regulatory and contractual fines that may result from an inability to perform business functions vary widely, but can be substantial.

After a downtime event, remedial actions are often required to repair the damage. For example, employees might work overtime – at overtime rates – or temporary staff may be contracted to recover lost data and enter accumulated paper transactions. And, if customer satisfaction was damaged, a costly special marketing program may be necessary to win back customers. (Information Management, How Much Does Downtime Really Cost?)

Take the Next Step

Just as a doctor who is dealing with a patient having a heart attack, he first needs to stabilize him. The doctor doesn't have the luxury of looking for the root cause. But of the IT director, finding the root cause might just be the fastest path to stabilization and be the best way to minimize the IT failures that cause stress and damage IT's reputation.