Last week the internet went without ads, well at least for about 90 minutes, after Google's DoubleClick for Publishers (DFP) service, the ad-serving platform used by many sites, had an apparent outage.

Informationweek reported, "Google's publisher ad network brought in about $3.4 billion in Q3 2014, so 90 minutes of that works out to about $2.4 million"

Gigaom posted "News of the failure began to circulate on Twitter and on Google forums around 9:15ET, as publishing and advertising workers began to ask where all the ads had gone."

AdWeek emphasized that "Some rivals jumped on the disruption to suggest that DoubleClick's system may be straining under the weight of data used by real-time online ad-placement systems that try to show the right ads at the right time in the right place."

Crazy, @Google #Doubleclick went down for ~90min yesterday. They make about $1,800 per second from #advertising , do the math #bannergate

As the infrastructure in data centers becomes much more complex and the demand for change is more frequent, the challenge of keeping track of changes becomes nearly overwhelming. 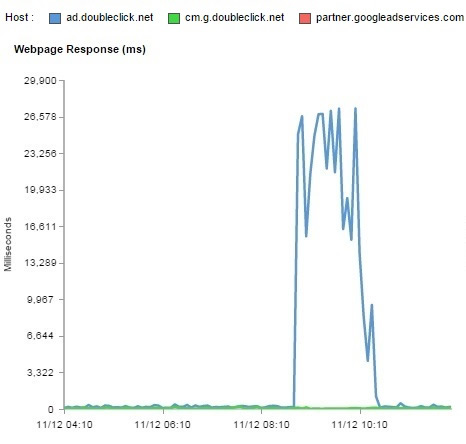 The outage, according to Google, was "due to a misconfiguration, [and] we were unable to prevent the outage."

The misconfiguration sparked an outage lasting for about 90 minutes on November 12th, affecting an estimated 55,185 and leaving publishers briefly without revenue

The outage showed just how many web publishers rely on Google's ad-serving system. Also it's events like this onethat highlight the pressures that IT operations face in managing complex systems. Seemingly minor IT changes can slip into complex systems at anytime, whether authorized or not. As shown here, even an infrastructure the size of Google can come undone by just a misconfiguration, pushing a stable system into an incident state, resulting in an outage. As we saw this not only impacts reputation, but makes for angry customers, and heavy financial implications.

Google delivered an official explanation on the cause of the outage that affected DoubleClick for Publishers (DFP).WSJ reported ""[Outages like this are] both rare and a fairly big deal," said Andrew Frank, a media and marketing industry analyst at research firm Gartner. "Such an event might promote interest in Facebook's Atlas alternative, or other options like AppNexus, OpenX and AOL. But I suspect it will take more than an hour's outage to move the market share needle for publisher ad servers given how deeply embedded these are in ad-operations infrastructure."

Change is a constant for today's data centers. Despite how IT operations has tried to manage change, staying on top of the many multiples of configurations and their changes is still one of the most challenging aspects of IT operations, making the management of change and configuration problems a chronic pain for IT operations.

Today as IT operations faces new levels of challenges, IT operations leaders are looking for new ways to deliver more value to the business. Tools for effective decision making can improve the infrastructure and operations (I&O) team's ability to allocate resources and address complex activities. Learn how Evolven's new IT Operations Analytics (ITOA) approach delivers the intelligence that IT operations crave, allowing them to turn piles of configuration data into actionable information.

Your Turn
Are YOU able to stay ahead of misconfigurations?